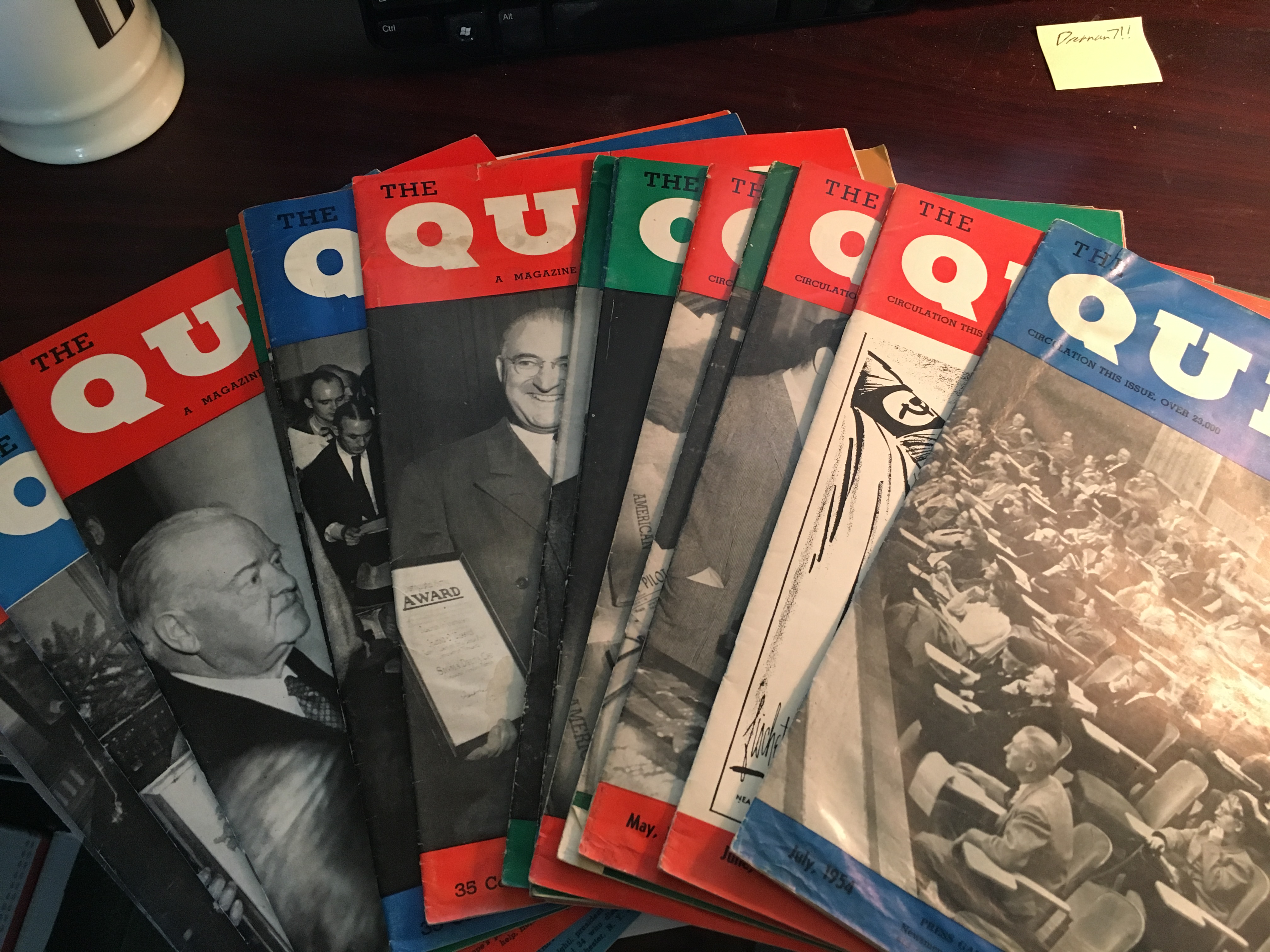 A media historian reflects on using Quill as a source For more than a century the Society of Professional Journalists’ Quill has evolved from the ambitious, collegiate musings of a few earnest young men in a journalistic fraternity, Sigma Delta Chi, to the national resource that it remains for all its members.
I first encountered Quill and SPJ while a journalism student at the University of Washington. Our professors — many of whom had worked for years on daily print papers — urged me to join, and so I did.

I remember how, on rainy Seattle afternoons, every month or so, working reporters would stop by our meetings and counsel us how to survive a brutal job market (it was the late 2000s and the Great Recession was very real), get a handle on technology (use Twitter, they told us, but don’t be dumb about it), and actually do the job (cultivate sources, but don’t be their buddies).

I met people in local newsrooms as I interned who had come to our college chapter meetings. But then I discovered how Quill could be a source, not just for current events, but for understanding how some of the best journalists in the past had lived and worked through times even darker and harder than the ones I lived through as a student.

For my dissertation, which was a history of the American newsroom — specifically its physical space and also the working relationships between reporters and editors — from the 1920s through the 1950s, I read hundreds of issues of Quill. Nearly every one, in fact, ever published. I started with the first tentative issues in the early 1910s, the first being published in 1912, to get a sense of what Sigma Delta Chi thought of newsroom work culture, from the more college-educated (still rare at the time) perspective.

Now, with a new project on the history of newsroom technology in the 1970s and 1980s, up to the adoption of the internet, I’m reading it again, beginning in the 1960s, to understand more about the people and problems of the era.

What I’ve found has been immensely interesting, encouraging and occasionally confounding.

With help from the librarians at DePauw University, I searched in physical form the bound copies of rare 1920s and then also 1930s-era Quills. With further assistance from academic mentors, I’ve continued to work with primarily physical copies.

And yet nothing really prepared me for the lovingly created nature of Quill through the years. When it moved to Chicago in the 1920s, it still felt more or less edited and published by well-meaning, but cash-strapped and overworked volunteers (because it was).

But by the 1930s and the Great Depression, it was vibrant, opinionated and colorful, with photos and entertaining writing peppered throughout. Despite the severe economic anxieties of the era, it was still produced regularly and contained encouraging tips on how to freelance, switch jobs or keep the one you had. It overcame its own literal trial-by-fire, when the magazine survived a fire in its offices in the Chicago stockyards in 1934.

Most of the articles included distractingly vivid anecdotes about newsroom life. I remember how, during one long day spent perusing its issues, I found myself reading about what copy editors felt about reporters, and what reporters thought of copy editors, in goofy put-downs disguised as light verse. I was so inspired I laughed aloud in my grad school office. Thankfully, my officemates put up with my Quill-inspired outbursts.

Quill’s legacy over the American century

With the birth of the American Newspaper Guild in the late 1930s and then the advent of World War II, Quill took on a serious feel. It walked a delicate, even precarious, line between newly empowered news workers, many of whom were women (and some of whom wrote for Quill, despite not being allowed membership in the organization for another generation), and their more old-fashioned bosses, many of whom hadn’t gone to college to study journalism.

Writing in the spring 1946 issue, Carl Kesler, who did double duty as the chairman of Sigma Delta Chi’s headquarters committee, noted that “the Quill should be a leading professional journal. It should cover the techniques, the ethics and the personalities of journalism in such a way that every working journalist should want to read it.” He would remain on the job until his death in August 1956. To do that, though, Kesler and his writers had to advocate for reporters but also remember the sometimes strange power dynamics of the newsroom.

In my research, I’ve found it’s critical to have a mix of voices, with an emphasis, in my case, on those people from the margins or at least those who are not well-represented. While Quill had a number of editors and a few publishers who would write for it, many of its articles were by younger men and women who lived more modest, humble lives away from the media capitals of the East Coast.

In the 1950s, Quill took on a new role as a promoter for a more transparent government, calling out both the likes of McCarthy and reflecting, publicly, on how journalists failed to hold him accountable. In Vietnam in the 1960s and then during the Nixon years, its staff and writers reflected on the dangers of war reporting from a disputed and often despised conflict and then on the reality of working with an administration whose hatred of reporters was profound. Having a full-time editor by this point — Clarence Schlaver became the first in 1961 — helped, too.

The rest of the 1970s and 1980s brought on a commentary on new and important fellow voices thinking about journalism and its role in society, including The Columbia Journalism Review but also other reviews that helped the field mature further and finally engage better with issues of representation and race, and the power and limitations of the First Amendment.

The 1990s brought with it reflections on technology in what might appear to be a halcyon time in retrospect, but had plenty of its own worries about the impact of not just newsroom computerization but also the first forays into journalism online, complete with a more ornery, engaged audience.

What Quill has meant to me as a media historian As I’ve flipped through the pages of Quill, I’ve seen careers start, reach a kind of peak and plateau, as life took over and people had families, then retirements and finally passings. I can’t recall the number of times I’ve tried to find a reporter’s name to see what happened to him or her, especially with the more recent Quills from the mid-century onward.

A wise journalism mentor once told me that the field has gone through so many ups and downs, dark nights of the soul where some new technology or economic retreat or government mandate threatens it existentially, that the temptation to despair and worry or just fret is as old as journalism itself. Reading the magazine has confirmed the truth of that advice.

I hope my work as a media historian can help provide some perspective. While it’s not true that journalists don’t have a sense of history, they’re just so busy and focused on the present moment that they occasionally forget that they, too, have a history. It’s complicated, sometimes unglamorous, or occasionally embarrassing. Quill was a product of its time, as were its staff and contributing writers.

But in its pages, one can see the history of American journalism with its muddled mistakes, setbacks and dead ends. There’s a reason why we don’t read faxed-to-us newspapers (facsimile technology was all the rage in the 1930s), or that TVs-with-newsy-text (Videotex) never quite replaced a dedicated news-gathering channel or operation.

With its varied membership, which included TV and radio journalists, its pages have been the forum by which news workers have hashed out their differences. In the 1950s, especially, the size and noise and lights of multimedia reporters’ gear would drive print reporters crazy.

They’ve also been a place where issues of gender and racial equality have emerged, especially after 1969 and the inclusion of women as members.

As Charles Clayton, who succeeded Kesler as editor, noted in 1958, Quill was a “forum for the discussion of journalistic ideas and problems” and served “all phases of journalism — the problems of journalism education, the working press, industrial publications, pictorial journalism, and radio and television news.” Clayton was the author of a history of Sigma Delta Chi, “Fifty Years for Freedom,” published by Southern Illinois Press in 1959.

My favorite part of reading through as much of Quill as I have is not when I found an intriguing speech about the nature of “professionalism” during the rise of the guild in the 1930s and 1940s, or when I read the reasoning behind the 1926 Code of Ethics, or in other famous moments in media history, but in the many small and more mundane bits of professional life Quill managed to capture. Unlike in Editor & Publisher, where many of the senior editors and owners had biographies written by and about them, most of my characters, as it were, were and remained unknown outside the circle of their immediate colleagues, friends and family, in terms of the larger historical narrative.

But when it came to journalism’s story, reflecting the messiness and promise of American life more broadly, these people were known. To their peers across the country, and their rivals across town, along with politicians and business leaders, they were chronicled carefully, thanks to the way Quill captured them, doing their jobs unheralded. They’re known to me and other media historians who use the magazine as a source, too.